Most people focus on the eyes when they look at the face of another. The appearance of the eyes can make us look "tired", "angry" or simply "old." While it is true that the skin of the eyelids (particularly the upper eyelid) becomes looser with age, some patients develop bags around their eyes in their early twenties. Also, the position of the eyebrows also affects the appearance of the eyes, as sagging brows can push eyebrow skin down onto the upper eyelid.

Blepharoplasty can quickly improve "tired" looking eyes. These before and (3 weeks) after photographs show how quickly the eyes can be rejuvenated by removing excessive fatty deposits and skin on the upper and lower lid make the eyes appear "brighter" and "fresher".

Combining lower blepharoplasty with midface lift can enhance the appearance of both the cheeks and eyes. 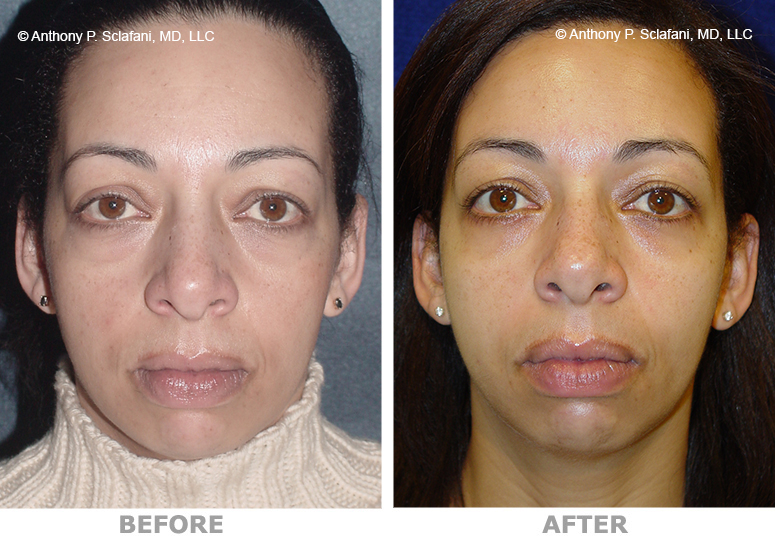 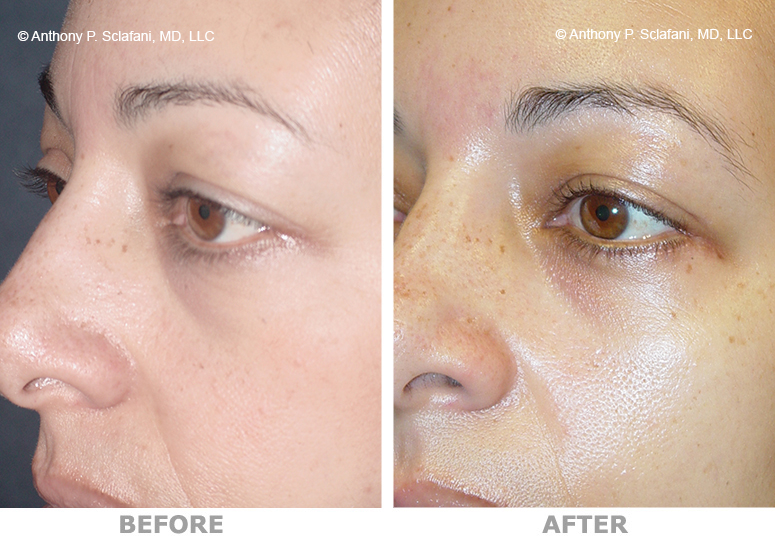 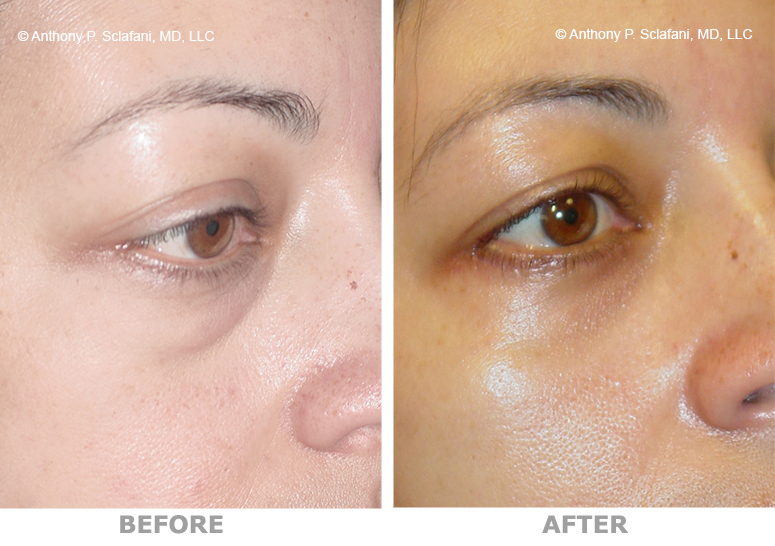 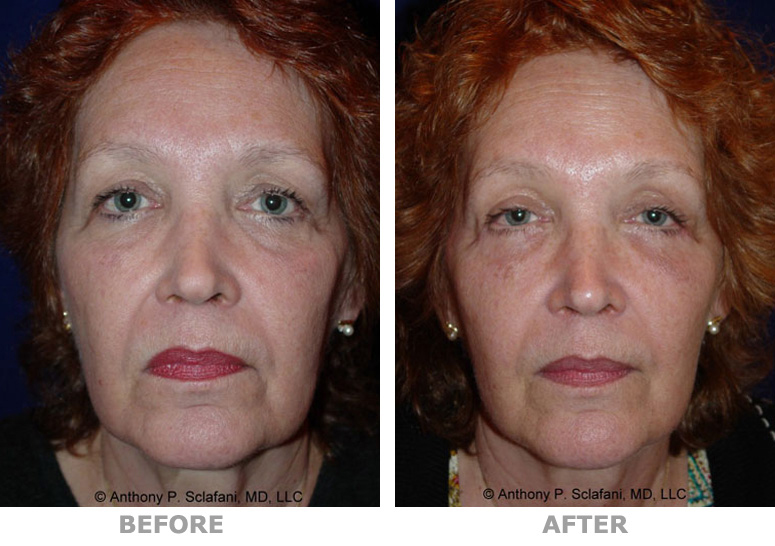 Most people dissatisfied with the appearance of their upper eyelids will point out extra skin hanging down towards their eyelashes, as well as "puffy" areas in the lid itself. As mentioned earlier, with age the skin of the lid thins, stretches and becomes less elastic. This "extra" skin is unsightly, but can also impair vision. The "puffiness" is actually fat normally surrounding and cushioning the eyeball. Over time, the structure that normally retains this fat behind the lid may weaken, allowing some fat to slip forward and produce a bulge in the lid. Modern eyelid surgery takes advantage of the existence of a natural crease in the upper lid; the incision is placed in this crease, so that the final scar is no more noticeable than the crease itself. Excess skin can be removed, and the bulging fat can be removed as well.

Traditionally, lower eyelid surgery was performed through an incision just below the eyelashes, after which excess fat and a small (usually very small) amount of skin was removed. Over the past 10 years, surgeons have increasingly realized that generally very little skin was removed. Also the fine lines on the lower eyelid were not treated by this surgery. With improvement in resurfacing techniques, a newer, and more logical procedure has come to the fore. Transconjunctival blepharoplasty allows cosmetic surgery of the lower eyelid to be performed without any visible scars. By making an incision on the inside of the lower eyelid, the fat bulges of the lid are approached more directly. For the patients with fine wrinkles on the lower eyelid, the skin can be resurfaced to smooth the lines, as well as tighten and contract the loose skin of the lower eyelid. Occasionally, the more traditional approach is used when excess skin needs to be removed.

Upper eyelid surgery may occasionally be covered by insurance, if there is a significant impairment of vision, but blepharoplasty is generally a cosmetic procedure. Cosmetic eyelid surgery is very rewarding for both the patient and surgeon, since the results are seen quickly and patients can return to their usual activities within a few days.

What to Expect After Eyelid Surgery

Sutures are usually removed easily at 5-7 days after surgery.

In order to allow your tissues to heal properly, we ask that you refrain from brisk physical activity for one week. Walking and non-physical activities are allowed, but it is best not to exercise for the first week. After the first week, aerobics, running, stair climbing, exercise bicycling and treadmills are permitted, but weight lifting (free weights or machines) should not be done until after the end of the second week after surgery. However, once the effects of the anesthetics have worn off, it is not necessary to remain in bed or at home. You may shower as soon as the effects of the anesthetics have worn off and you can comfortably stand on your own.

The skin and tissues about the eye are quite delicate and surgery naturally causes some swelling and bruising of the eyelids and surrounding area. The conjunctiva, or clear membrane covering the eyeball itself, may swell and give the eye a boggy appearance and may also cause some minor blurring of vision. If you wear contact lenses, it is probably best not to wear them for 5- 7 days after surgery. In order to limit bruising and swelling, ice compresses should be applied over the forehead, both cheeks and eyelids for the first 24- 36 hours after surgery. Compresses should be applied for 20 minutes at a time, with 20 minutes before reapplying. Also, homeopathic medications Arnica Montana and Bromelain may limit bruising and swelling. This is best started at least 1 week before surgery and continued for 3 weeks; check with your doctor before using these.

These sensations of the eye, too, are normal following surgery and may last for several months but usually are most noticeable in the first week after surgery.

Some discomfort due to surgery and swelling is normal, but pain is usually easily managed with Tylenol.

Some mild visual blurring may occur due to swelling of the conjunctiva and may clear temporarily with blinking, and usually clears with a day or two after surgery.

A little blood- tinged oozing along the suture lines is normal for the first 1-3 days, and may be gently blotted with a clean Q-tip. Small blood clots (hematomas) may also occur in the conjunctiva and appear as red blotches on the white of the eye. These resolve in 7- 10 days.

The scars from blepharoplasty are usually minimal after complete healing has occurred. In the first 7- 10 days after suture removal the incision may be barely visible. The scar then enters a "red phase" and may appear thicker. This can be camouflaged with cosmetics. After several weeks the scars begin to fade and lighten in color.