A severe congenital anomaly is the failure of the ear to develop normal before birth. The ear may simply be smaller than normal, but may be completely undeveloped with no outer ear or ear canal.

Children with this condition, known as microtia, may suffer severe social difficulties, in addition to hearing loss. Fortunately, Dr. Sclafani, as the Facial Plastic and Reconstructive surgeon of the Ear Institute at The New York Eye and Ear Infirmary, can help. Working together with the Institute's otologists, he can create a natural appearing outer ear; after this, the ear canal and ear drum can be created.

Microtia is a congenital deformity in which the outer ear does not develop. Through a series of procedures, natural tissue from the patient is used to create an outer ear. Correction of microtia can be done at any time after the age of 5 or 6, and can prevent severe psychological and emotion distress. 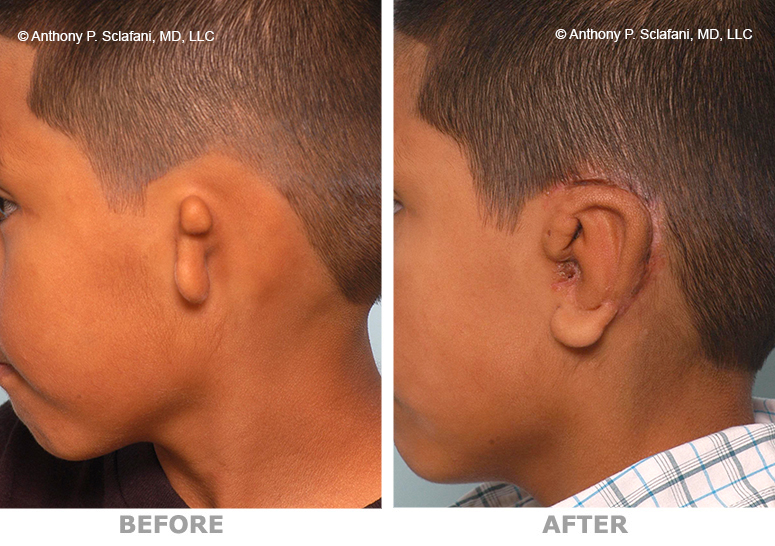 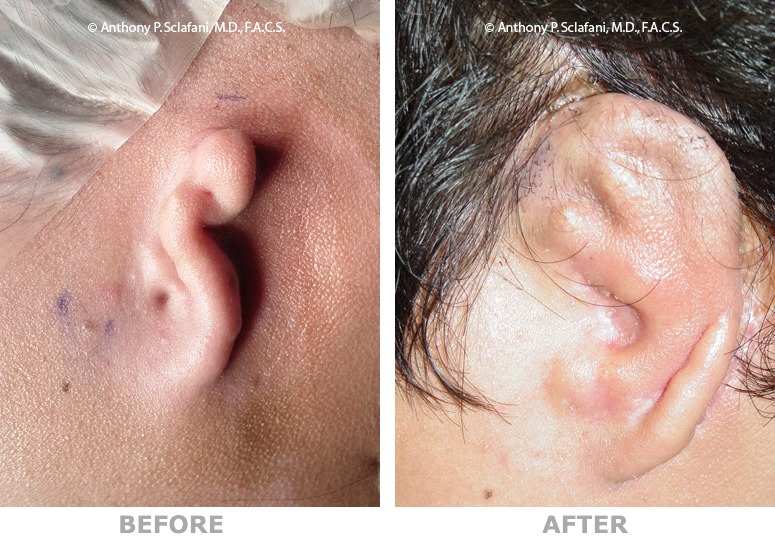 Repair of aural atresia (construction of an ear canal and eardrum) can be coordinated with repair of microtia to produce a natural appearing, functioning ear. 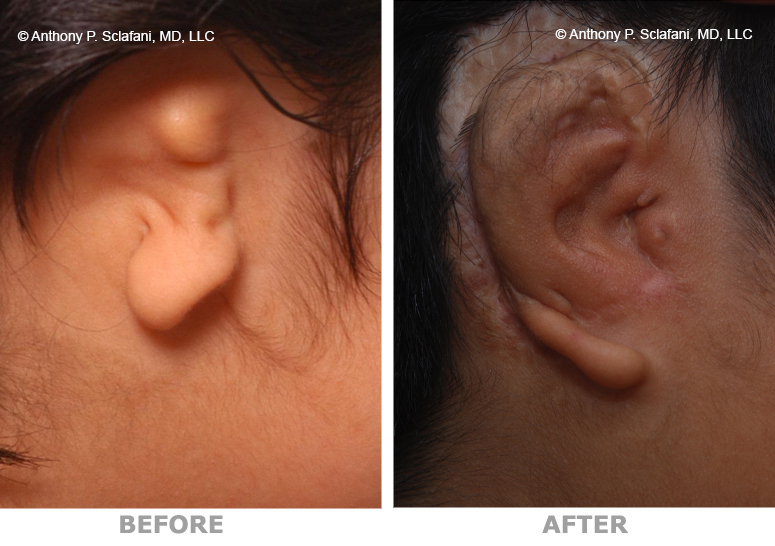 Surgery for microtia requires several stages spaced several weeks apart, as the form of the ear is created and then brought to a natural position.

Surgery for microtia is done in a several stages. As there is no real ear structure, the first stage involves harvesting cartilage from several ribs and carving and constructing a framework for the new ear structure. This is then buried under the skin where the new ear will be located. Several weeks later, existing skin near the framework is used to create an earlobe. Finally, a third procedure is performed to lift the newly created ear is lifted away from the head into a normal position.

What to Expect After Surgery for Microtia

Sutures are well hidden, and usually are left to dissolve on their own over the first 1-2 weeks.

In order to allow your tissues to heal properly, we ask that you refrain from brisk physical activity for two weeks. Walking and non-physical activities are allowed, but it is best not to exercise for the first 2 weeks. After the first 2 weeks, aerobics, running, stair climbing, exercise bicycling and treadmills are permitted, but weight lifting (free weights or machines) should not be done until after the end of the third week after surgery. However, once the effects of the anesthetics have worn off, it is not necessary to remain in bed or at home. You may shower as soon as the bandages have been removed. The protective dressing should immediately be replaced after each shower.

Ear swelling is expected but is usually moderate, and the gentle contours of the new ear may not be apparent for several weeks.

Bruising, too, is normal. The bruises on your ear may "fall" onto your neck before disappearing. Most bruising will resolve in the first 7 days after surgery and may be concealed with makeup one week after surgery.

Itching along suture lines and in areas adjacent to the face (scalp, forehead) is common and temporary. A feeling that the ear is numb also occurs. Normal sensation usually returns within a few weeks.

Most patients experience little pain afterwards; most describe the discomfort as "soreness" rather than "pain", easily controlled with acetaminophen or acetaminophen with codeine. The ear may be tender to the touch, however, for several weeks after surgery.

Your ear may feel "heavy" for a few weeks following surgery. This is due to swelling and changes that occur with healing.