Facial scars not only present a physical deformity, but also serve as a reminder of a traumatic event. These scars may be noticeable for a variety of reasons, including irregularity of the skin, dimpling of the skin, or color differences. Scar revision can not erase a scar, but attempts to soften and blend it into the surrounding skin. 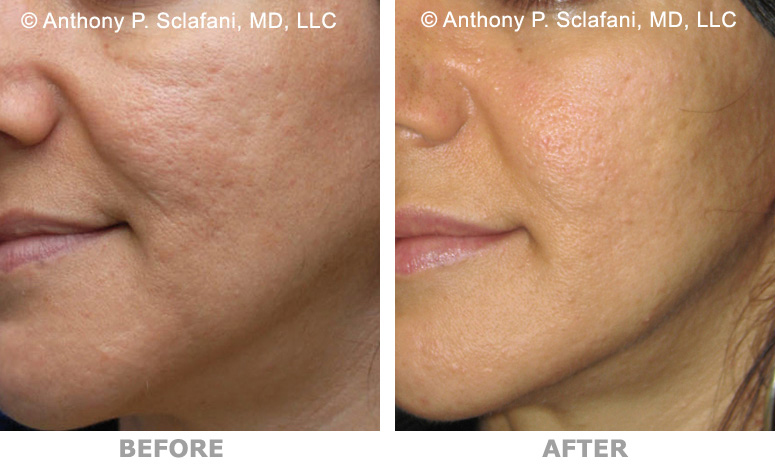 Selphyl® can be used in a quick and simple office procedure which can significantly improve the appearance of acne scars.

There are many techniques that are used to camouflage a facial scar, including removing the scar tissue and suturing the wound closed, shifting the scar to fall into a natural facial border or blending the scar with surgical techniques or dermabrasion.

The most appropriate procedure for a scar depends on its appearance, location and color. A personal consultation is the best way to find out what can be done for a facial scar.

What to Expect After Scar Revision

Sutures are removed one week after surgery. Some sutures hidden in the hair may be removed somewhat later.

In order to allow your tissues to heal properly, we ask that you refrain from brisk physical activity for two weeks. Walking and non-physical activities are allowed, but it is best not to exercise for the first 2 weeks. After the first 2 weeks, aerobics, running, stair climbing, exercise bicycling and treadmills are permitted, but weight lifting (free weights or machines) should not be done until after the end of the third week after surgery. However, once the effects of the anesthetics have worn off, it is not necessary to remain in bed or at home. You may shower the day after surgery, after first removing the dressing. While it is not necessary to cover the sutures, some patients are more comfortable socially if they cover the sutures with a Band-Aid

Facial swelling is expected and may be more pronounced 24- 72 hours after surgery than it is immediately following the procedure. Sleeping with your head elevated and sitting upright during the day for several days following surgery will help minimize swelling. Most swelling will gradually resolve in 10 days.

Bruising, too, is normal. The bruises on your face may "fall" onto your neck and upper chest before disappearing. Most bruising will resolve in the first 7 days after surgery and may be concealed with makeup beginning the day after surgery (except immediately around the wound). In order to limit bruising and swelling, ice compresses should be applied over the area for the first 24- 36 hours after surgery. Compresses should be applied for 20 minutes at a time, with 20 minutes before reapplying. Also, homeopathic medications Arnica Montana and Bromelain may limit bruising and swelling. This is best started at least 1 week before surgery and continued for 3 weeks; check with your doctor before using these.

Minimal oozing of blood and tissue fluid along the suture/staple lines may occur for a day or two following surgery. Bleeding that is severe or does not stop with 10 minutes of continuous pressure is rare and should be reported to our office.

Itching along suture lines and in areas adjacent to the face (scalp, forehead) is common and temporary. A feeling that the face, neck and earlobe are numb also occurs. Normal sensation usually returns within a few weeks.

Most patients experience little pain afterwards; most describe the discomfort as "soreness" rather than "pain", easily controlled with acetaminophen or acetaminophen with codeine.